Thanks go to my good friend Helen for recommending Tim Minchin’s Occasional Address when he accepted an Honorary Degree of Doctor of Letters from the University of Western Australia. Listen to what he has to say about teachers. If you’re pressed for time, here it is in print.

(You can read the rest of the transcribed speech here. Great for an English class!)

It made me think about those of us who are career teachers, and not just teachers for our twenties. It’s a hard gig being a teacher – there’s an unrelenting pace to the school year and the fact that it’s a job that continues well past the final bell means that it pulls on our families and our ability to pursue facets of our life that we’d like to pursue eg; the exercise that Tim is such a strong proponent for.

BUT, the rewards of the job are beyond measure…

Today was my last lesson with my Year 9 Language of our Times students. I’ve had a wonderful year with these girls, exploring ideas around communication in today’s world and utilising Project Based Learning methods of teaching with them. At the end of the lesson they hugged and thanked me. Ahhh…such rich rewards…for them, and me.

So yes, be a teacher.

Enjoy your weekend. I intend to. 🙂

Uploaded to YouTube by the NBA 22 hrs ago. Over 1.6 million views already. 2,878 comments. Just saw it on mainstream media featured in a sport news segment, not as an advertisement.

YouTube – you win. Mainstream media, you don’t stand a chance.

Enjoy your weekend everybody. 🙂

Today I took two students from my school to the Programming Challenge 4 Girls event at the University of Melbourne. I can’t remember how I found out about it, but I registered them a couple of months ago and they were certainly excited to participate. They haven’t had any experience with programming and since we’ve spent quite a bit of time in my Language of our Times class discussing the need for better representation of women in the field of computer programming, they were keen to have a go.

The programming language they were using was Alice. It has a graphical user interface and the students were dragging and dropping commands into it  – they could preview what the commands were directing their characters do and were learning by doing. While they got the hang of the drag and drop interface, the precision and attention to detail required to get the character to perform the most basic of functions was very challenging for them. After the 3 hour challenge, they came out quite exhausted with the mental effort that was required to see them create 15 seconds of what would equate to a game type interface. I’m very sure they have new found appreciation for the programmers of games they play and the thousands of hours that must go into creating the landscapes and complex scenarios.

While they were participating in the challenge, the teachers present were listening to Steven Bird,  Associate Professor in Computing and Information Systems at theUniversity of Melbourne. Steven was discussing the new Unit 3 and 4 VCE Computer Science curriculum due to be offered across the state in 2015. My tweets from the day are below: 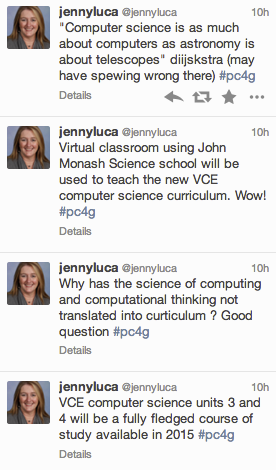 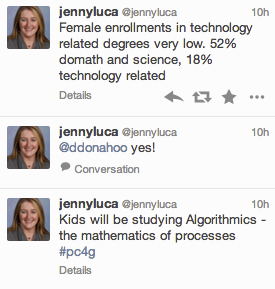 *apologies for the spelling mistakes! When you’re trying to tweet and keep up with the presenter, mistakes happen!

What was very interesting was the discussion around delivery of this curriculum. Steven Bird and a computing professor from Monash University are going to be delivering some of this curriculum via video using Google Hangouts and utilising Google + to form the learning community around it. This is in recognition of the fact that the expertise to teach a curriculum like this is going to be difficult to source in Victorian schools.

Is this the beginning of MOOC style delivery of curriculum for VCE students? It looks a bit like it to me, and why not? If expertise is required and it’s not available within our ranks, then we do have to do the right thing by our students and find ways to provide it.

The challenge is going to be finding students who want to study this discipline. Teachers at the event today were talking about the low numbers of students choosing the VCE IT Software Development course. Steven was talking about how the new Computer Science course is really directed at the kinds of students who are currently selecting courses like Specialist Mathematics and Physics and teachers were again sharing how courses like these often attract only small numbers of students. Hopefully the new Australian Curriculum Technologies subject will see some students’ eyes open to possibilities, but Steven discussed how that curriculum doesn’t go far enough into the computational mathematics and algorithmic thinking that is required for Computer Science. It was mentioned that we may have lost an opportunity given that our new Australian Curriculum for Mathematics has not identified computational mathematics within its scope and sequence.

If you’re a Victorian teacher and interested in joining a discussion around this new VCE Computer Science curriculum, an event is being held at the University of Melbourne from November 20th – 22nd. The programme for CS4HS looks very interesting. I’m hoping to make it to the first day at least.

Thank you to the organisers of the Programming Challenge 4 Girls. Definitely an event that has me thinking!

Back to the Future is one of my favourite movies. The Improv Everywhere team have done a pretty good job of recreating it for their ‘Movies in Real Life’ video series they have running now. I’m still waiting for the hoverboards that featured in Back to the Future II to become part of everyday life – we’ve still got two years to have that dream realised as it was 2015 when Marty made his way into a future where they were commonplace. Then again, maybe it’s a good thing they’re not ready for purchase – I can barely keep upright on a skateboard, let alone on something hovering in mid air!

Have a great weekend. I’ll be searching for sun, but the prospect of that in Melbourne this weekend is looking pretty grim. I hope the forecast ahead bodes better wherever it is you reside. Enjoy 🙂

I love a good marching band, and the Ohio State University Marching Band are better than good, they’re exceptional. If you’re not impressed by their Hollywood Blockbuster show, then I’m sorry, but you’re very hard to impress.

I’ve been impressed by my students this week. We’ve been looking at the future of journalism in the digital age, engaging in plenty of discussion and even talking with Skye Doherty, a Lecturer in Journalism from the University of Queensland. Skye skyped in last week to give my students her thoughts about the impact of the digital world on journalism and its future. Next Friday, Jewel Topsfield from ‘The Age’, is visiting the class to add her thoughts to the discussion. I’ve been trying to think of an appropriate form of assessment and was really pleased when they embraced the idea of tackling another Project Based Learning task, this one with the driving question being, ‘How do journalists report news in the digital age?’ Here’s the outline of the task:

You are part of a team of investigative journalists who have been assigned the job of responding to a strange incident (or series of incidents) at Toorak College.

You are reporting on the spot, and are using whatever means possible to pull together a story quickly for readers who have heard that something has happened and are hungry for news. Your newspaper is highly regarded and your readers are interested in learning about what has happened.

To get your report out quickly, you will be using a page on iVE* to curate the story. We’ll be trying to get our iVE page looking like Storify. Storify can be updated quickly and is used by some of the most highly regarded newspaper teams in the world to deliver digital content to their readers who are used to accessing the digital versions of the paper.  http://storify.com/guardian

What will your story contain???

*iVE is the name of our Learning Management System

They are enthusiastically working in groups and have come up with some terrific scenarios. They are planning in Google Docs and are assigning group members differing roles eg: some are writing the report, others will be filming witness interviews, footage of the incident etc. I love watching them sculpt the learning and really enjoy the creative process. Stress levels will increase as some of them realise that time constraints may inhibit their grand plans, but that’s all part of the process. Me, I can’t wait to see the outcome of their efforts – they have yet to disappoint!

Melbourne Cup Day here in Melbourne means a four day weekend ahead for me. I am beyond excited about that – relaxation, here I come! Enjoy the weekend ahead. Find the sun and soak in it. 🙂