If you share a house with a dog and a cat, then I’m pretty sure you’re going to be able to relate to what’s going on here in this collection of clips.

Cats have a way of dominating their surrounds. As I type, one of our cats is banging on wooden blinds in an attempt to rouse me to tend to whatever need she currently has  – more than likely a trip to the food bowl for a refill. She wakes me pretty much every night using the same method. My husband and I don’t think we’ve have had an uninterrupted night’s sleep in our home over the last eighteen years. (when you take children into account too!)

I’m heading to Brisbane on Monday for the EduTECH Conference where I’ll presenting on Tuesday afternoon. Two nights of uninterrupted sleep – ahhhh, the sheer bliss of it all.

Enjoy the weekend ahead, Get some uninterrupted sleep if you’re lucky. 🙂

I listen to a radio program on the drive home from work some days where they have a segment called ‘Lame claim to fame’. I love it. People ring in with their tenuous links to celebrities and the like and claim their five minutes of fame in what is always a humorous, light hearted segment. It makes me laugh. In the car. By myself.

So the other day, when I saw that twelve pages separated me from the great Sir Ken Robinson in the EduTECH Official Showguide, I immediately thought, here’s my lame claim to fame. So I posted this on Twitter. 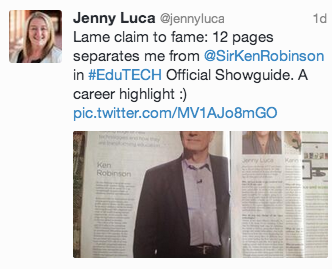 When I re-read it later, it occurred to me that the EduTECH organisers and Australian Teacher Magazine may be thinking that I’m making light of my inclusion in the guide. It might appear (as can be wont to do when you’re communicating in 140 character bites) that I was being sarcastic when I said this was a career highlight.

Nothing could be further from the truth. Let me state quite clearly , this IS a career highlight for me.

I feel very honoured to be selected for inclusion in the guide, alongside other local speakers Dan Haesler, Anne Weaver, Peter Evans, Karin Gilbert and yes, the overseas presenter and highly esteemed Sir Ken Robinson, who resides 12 pages in front of my piece. I’m very grateful to the organisers who contacted me and asked if I could share my thinking and allow me the opportunity share my thoughts in a publication that will be seen by many.

Sheryl Sandberg wrote a book in recent times called ‘Lean in‘, where she posits that women need to take their place at the table like men do, and lean in and make their voice heard. Anyone who knows me well, knows that I’m not someone who holds back on their thinking. I think I represent women well by making my voice heard in networks that are often dominated by male voice and by being a Keynote speaker who can hold her own and inspire people to take the leap to make moves to change their thinking and practice.

However, I don’t think I ‘Lean in’ enough. I don’t often retweet kind things people say about my presentations. I thank people, and I sometimes favourite their comments, but I’m loathe to retweet. I think I’ve done it once or twice and I’ve always felt uncomfortable after the fact, like I’m showing off and parading myself around for everyone to see. I don’t have a page in this blog full of testimonials from conference participants. And yet, I see it happening all the time in the networks I inhabit, often by men who are occupying the scene and taking their place at many tables.

That would have been a leaning in moment.

I had one of those moments in my Language of our Times class today when you know technology has become normalised within your classroom.

Poet Alicia Sometimes was visiting, running a workshop to help my students gain insight into how to begin writing Spoken Word poetry. After watching a couple of examples from YouTube and discussing how they might get started, they launched into groups to begin the writing process.

Google Drives were opened, members of the class created a Doc and shared it with others in their group and the writing process began.

Just like that. No prompting. No suggestion that Google Docs would be a good way to collaborate. Nothing.

Normalisation of technology use.

Technology as facilitator for learning.

As it should be.

I’m not a fan of mannequins at the best of times. For me, they belong in ‘uncanny valley‘ territory. Someone dressed as a mannequin standing next to a store mannequin – now there’s the next layer of creepy.

Improveverywhere’s mission had an unexpected outcome for some participants. Unexpected, but not entirely unsurprising in today’s security conscious age, and in the centre of New York no less!

Enjoy the weekend ahead. A reasonably quiet one for me is forecast, and that suits me just fine given the pace of the last few weeks. If I’m smart, I’ll get a head start on report writing.

Make sure you click through every one of Ayelet Baron’s slides about the need to create a connected organisation for the 21st Century. When you do, think about where you work and whether or not leadership in your organisation is living on the edges to provision change.

If you’ve seen me present anywhere recently, you will know that I am fascinated with what it is we need to be doing to prepare our students for future working environments very different from the ones many of us (teachers of a certain age…) walked into.

For that matter, I envisage the profession of teaching and our classrooms of the future will look very different too. There is no room for “that’s not how we roll here” thinking. 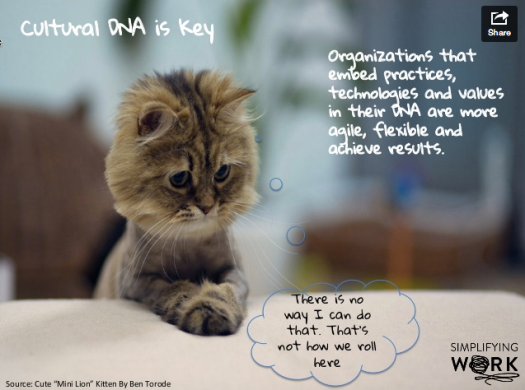 I was reminded of this today when members of a school visited to see what it is we are doing with technology across our campus. At the end of our discussion one of the visitors said that he realised innovation was being stifled where they worked. They were worried about those resistant to change, rather than embracing change and working with resistant staff in the process.

It is challenging leading change. You’ve got to suck your breath in deep and and hold it. Every now and then you get to exhale and revel in both small and large victories. It’s not easy, but it is necessary, and worth it.

I dare you to watch this and not be affected. My heart was in my mouth when I watched this homeless man’s reaction to what he thought was a generous gift. Honestly, I was praying that this wasn’t going to turn into some cruel prank where they took the money away from him.

Thankfully, my fears were unfounded. The follow up video demonstrates just what Internet communities are capable of when people are affected by the plight of others. There is good in the world; we just need to find ways to harness it.

I have been chasing my tail these last couple of weeks. I’ve presented four sessions at three conferences, two of them Keynotes, in the last 10 days. That’s pretty darn busy by my standards. The energy levels are fading fast right now and I’ll be seeking the solace of my bed as soon as this is posted!

Enjoy your weekend. Uncommonly good weather is visiting Melbourne this weekend, and I, for one, will be making the most of it. Here’s to sunny day days in the backyard with a good cuppa. 🙂

Where have I been? Why has this been available on YouTube for 7 months and I have remained ignorant of its existence?

My daughter said I’ve been living under a rock, and she just may be right. Trying to keep abreast of all that’s new means you sometimes miss the lighter side of life. I tripped over Jimmy Fallon’s Lip Sync Battles on YouTube and fell in love with Joseph Gordon Levitt’s rendition of Nicki Minaj’s ‘Super Bass‘.  He is far more entertaining! You’ll have to venture 8 minutes in to see him Lip Sync ‘Super Bass’ but the rest of the battle is worth watching anyway. Stephen Merchant holds his own with ‘Boom! Shake the room’. Do watch.

Emma Stone went into battle with Jimmy three days ago and they’ve already scored over 11 million hits on YouTube. I’m still incredulous when I hear people say they have never visited YouTube. If you’re a teacher and don’t realise that YouTube is the television of your students’ generation then you’re the one living under a rock.

Have a great weekend. Lip sync to your favourite song in the car. You may entertain a fellow traveller at the lights. 🙂