Last Friday, I returned to Australia after spending eleven days in Borneo, six of them in a village working with my students as we helped to finish works on a community centre there. This is my second foray into community work in village communities and once again, I was deeply affected by the experience. 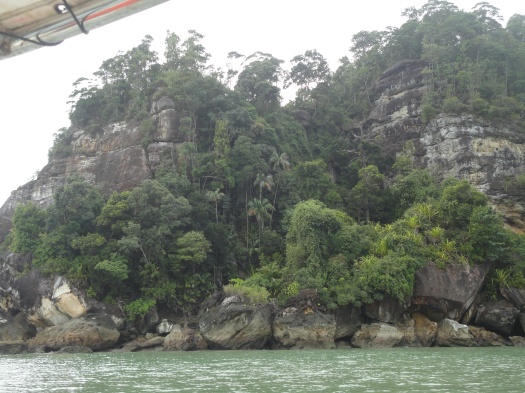 My life in Australia is very good. Better than good really. I have a job that I enjoy, two children who want for nothing and support from a loving husband, family and friends. I work hard, but that means I’m able to provide adequately for my family and don’t have to worry about having enough food on a table or enough access to water or the amenities of modern lifestyles we enjoy in countries like Australia. This time last week, I was bathing in a river because there was no running water available in the village I was staying in. We were without internet or phone access and felt cut off from the rest of the world. It was strange to have no inkling of what might be happening at home with our families or on some other corner of the world stage. Our focus was on those around us and the job at hand. We felt connected to one another and took delight in the simplest of things. By the end of my time there, bathing in the river seemed natural, as did wearing no makeup and having no access to my hair straightener! (And no, I’m not sharing a photo of what that sight looked like!)

I stayed with a group of girls in a villager’s home. This lady had very little, but what she had she made available to us. Our conditions were basic, but I will be forever grateful to a lady who had no words of English, but could communicate her desire to help us with hand and eye expressions. She would fold our clothes for us and vacate her property to allow us space when we were there. When we left, I gave her my gold earrings. She sobbed as we left, and pointed her finger to the heavens and then at me to indicate her thankfulness. Those earrings were a gift from my husband, but they have found a place in the world where I’m sure they are greatly appreciated.

Borneo surprised me. Kuching, the capital of Sarawak, is a far more modernised city than I envisaged. In fact, most of the area we covered was surprising to me. The roads are pretty well maintained, a far cry from those we encountered in Laos last year when heading to a village there. What did strike me as we travelled through the tropical countryside were the amount of Palm Oil plantations cropping up all over. Some were vast, and that was where we saw very new roads  – it seemed that these were to support vehicles accessing these plantations rather than being established to support the neighbouring villages that abut these plantations. One of our guides talked about the lack of foresight going into the establishment of these plantations. The Palm trees will serve their purpose for 20 – 25 years or so, but after that the land will need to remain clear for up to seven years. There will be vast tracts of land barren for some time in the future given the number of plantations we saw. It was difficult to reconcile the kind of reaction to Palm Oil we display here in Australia with what was happening in Borneo. I could empathise with how the people of Borneo see a means of improving their lot in life with the development of a profitable export industry. We in the Western world pass judgement, but much of the land we inhabit was cleared by our forefathers many years ago for similar pursuits and desires to improve our lot.

Visiting the Semengoh Orangutan Sanctuary was a stark reminder of what effect deforestation making way for Palm Oil plantations can have on these beautiful creatures. We were lucky enough to see thirteen orangutans on our first visit, including Ritchie, the dominant male who is an imposing figure. We returned for a second visit on our way back from the village, and we were greeted in the car park with the sight of Ritchie, sitting in the tree adjacent to where we’d parked. The park rangers were there and ensured we kept out of immediate distance as he is a semi wild creature and can be unpredictable. We made our way further into the park but saw only two other Orangutans. When we returned to the car park, Ritchie was still in the tree, but soon climbed down so we dutifully backed away. He made his way safely into the jungle and we marvelled at having had the opportunity to see him so closely. The next day, one of our guides informed us that his favourite female had died the previous week and she liked to habitate a tree near that carpark. He suspected Ritchie was there looking for her. I asked our guide if the people of Borneo were as concerned about the plight of the Orangutan as much as we in western countries are. He said that until he began work as a guide, he was not conscious of their plight, and it’s only because he hosts so many groups who come to Borneo specifically to see these animals that he has realised their importance and how Borneo is viewed on the world stage.

One thing I was totally unprepared for was the heat of Borneo. The equator runs through it, and we were very close to it in the areas we visited. It’s amazing how depleted you feel when you’re sweating from the early hours of the morning until late into the night. We were trekking through mountainous jungle parts and working, mixing concrete with shovels, in conditions like these. Linda (the teacher who came along with me) pegged the trip ‘boot camp’! She was right – hopefully it’s sparked the fitness campaign I desperately need to be following!

We visited the school in the village and I was surprised at their teacher to student ratio. There are 28 students at the school, and eleven teachers! Again, another stark contrast to Laos where there were three teachers and 54 kids in a class, with ages ranging from 5 through to 12 in each one. The school itself was probably the most impressive building in the village, but their facilities were fairly basic. Chalkboards dominated and there was no access to the Internet. The teachers have to go to the nearest town to send and receive emails. Sarawak (the part of Borneo we visited) is part of Malaysia, and no-one in the school, Principal included, had heard anything about the Malaysian Government’s deal with Google to provide Google Apps and Chromebooks to every student in Malaysia.

Given that the video above states that it is the Malaysian Government’s intention to provide 4G access and Chromebooks to every student, there’s going to be some high level professional development required for small village communities like the one I visited. Access like this will revolutionise these small communities and potentially threaten their existence. Already, it seemed apparent that the community was heavily weighted with older inhabitants. As young people leave Primary school in village communities like this, they need to move to city centres like Kuching to gain access to Secondary education. There, their eyes are opened to another way of life. We were conscious of many families from the village whose sons and daughters had left and were living elsewhere. The fact that there were only 28 children in the school may be an indicator of a changing demographic and a shift away from traditional village life. I may be wrong, being mindful that I’m basing an opinion on six days of exposure to a culture.

Experiences like this are so valuable. I know our students gained enormously from this opportunity to immerse themselves in another culture and live a life so markedly different from their own for a short period of time. The act of giving to others via the community work was something that hopefully will impress upon their psyche and shape their outlook and actions in later life. I’d like to thank my school (Toorak College) for giving me the opportunity to have another experience that shapes my thinking about the world we live in and my part in it. Experiential learning like this provides far more for individuals than words written in a textbook or on a webpage.