Does this remind you of anyone? You, maybe? Those of us who tweet regularly, update our status on facebook, those of us who blog? Once again, improveverywhere have made me smile, and plenty of others in that audience too by the looks of things.

BUT, not everyone agrees with the mirth and merriment. This video was posted on the TED site this week, and the comment thread accompanying it shows that some TEDsters are unhappy that something so ‘light’ could be put up as being worthy of inclusion. Take this comment as an example,

Between the video on how to tie your shoes and now this improv anywhere video that is reminiscent of something that would recommended to me on youtube, I’m a little bit disappointed in the videos that have been posted recently. It’s not that theres nothing to learn from these videos; one could make the case that the shoe tying video shows the importance of reexamining things we’re sure of or that this video shows the value of play and spontaneity, but I think those would be a far stretch. I guess over the years I’ve become accustomed to a TED that challenges me and expands my view of the world, not panders to me.

Really TEDsters? Lighten up. Not everything needs to be serious. In fact, sometimes taking the mickey out of ourselves provides insight into the way we conduct our lives.

Anyway, my need to share brings me to this. Last week was House Music day at my school, and I was mightily impressed with the small group music items. The winning group posted their effort on YouTube, and like a proud mother, I just have to share the talents of the students at my school with you all. So, take it away Cerutty Mads 2011, singing Love You by Free Design.

Hope you enjoyed it as much as I did.

Have a great weekend. Enjoy : )

The TED Conference is being held right now in Long Beach California. This year’s TED Prize winner is JR, an artist from France, whose incredible artwork has been seen in the slums of Kenya, in Brazil, in India and even in Israel and Palestine. Here’s what they say about JR on the TED site;

Working anonymously, pasting his giant images on buildings, trains, bridges, the often-guerrilla artist JR forces us to see each other. Traveling to distant, often dangerous places — the slums of Kenya, the favelas of Brazil — he infiltrates communities, befriending inhabitants and recruiting them as models and collaborators. He gets in his subjects’ faces with a 28mm wide-angle lens, resulting in portraits that are unguarded, funny, soulful, real, that capture the sprits of individuals who normally go unseen. The blown-up images pasted on urban surfaces – the sides of buildings, bridges, trains, buses, on rooftops — confront and engage audiences where they least expect it. Images of Parisian thugs are pasted up in bourgeois neighborhoods; photos of Israelis and Palestinians are posted together on both sides of the walls that separate them.

JR has been awarded the prestigious TED Prize. His wish? To use art to turn the world inside out. 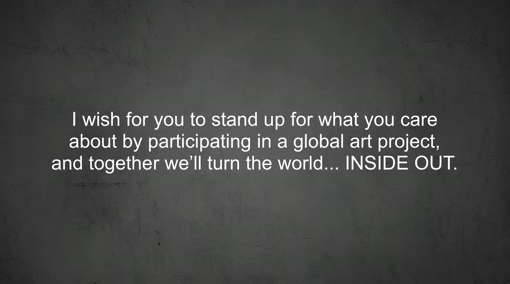 His work has such appeal he just might be able to inspire people to run with this idea. Imagine if our schools connected, and we worked cooperatively to make an impact on issues our world faces using art as our impetus.He has started Inside Out: a global art project. I think it will be amazing.

“INSIDE OUT is a large-scale participatory art project that transforms messages of personal identity into pieces of artistic work. Everyone is challenged to use black and white photographic portraits to discover, reveal and share the untold stories and images of people around the world. These digitally uploaded images will be made into posters and sent back to the project’s co-creators for them to exhibit in their own communities. People can participate as an individual or in a group; posters can be placed anywhere, from a solitary image in an office window to a wall of portraits on an abandoned building or a full stadium. These exhibitions will be documented, archived and viewable virtually.”

There’s something in that, and considering the art faculty of our school were thinking of including the work of JR in the curriculum, maybe this is something we need to discuss next week!

Enjoy your weekend. Spend some time on the TED site and get inspired. : )

Emily Pilloton delivers an inspiring TED talk that is worth the 16 minutes you need to invest to hear her message. People who give of themselves to assist those in communities where there is real need are special. Emily and her partner, Matthew Miller, have relocated to Bertie County in North Carolina and are trying to reinvigorate the community by using design principles to transform the learning opportunities of students. Their hope is that the student led projects that emanate from this will help bring the community together and provide benefits for all. They are committed; both of them have recently studied and received teaching certification so that they can teach their design-build class called Studio H. Emily has written a post worth reading on Design Mind that expands on some of the ideas she discusses in the above TED talk.

Their idea is reminiscent of Project Based Learning principles and requires students to be immersed in what they’re doing for three hours a day. They are rethinking education to meet the needs of the community they live in and care about.

Lessons here for us all.