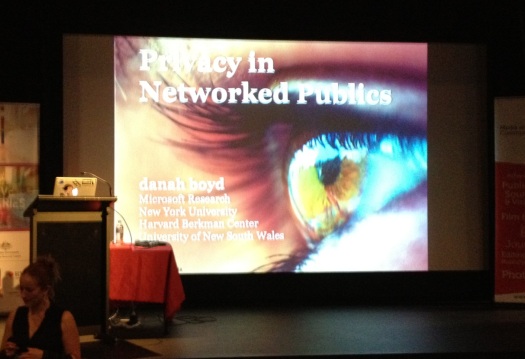 I had the privilege this afternoon to listen to  danah boyd * deliver a talk entitled, ‘Privacy in Networked Publics’, at RMIT. danah is a Senior Researcher at Microsoft Research, a Research Assistant Professor in Media, Culture, and Communication at New York University, a Visting Researcher at Harvard Law School, and an Adjunct Associate Professor at the University of New South Wales. I’ve long admired danah’s work, and regularly read her blog, danah boyd | apophenia. If you’re looking to understand what teenagers are thinking about when it comes to their behaviours in social networks, then danah’s research findings are the place to start.

danah presents at a blistering pace, and I took copious notes along the way. I’m not going to recount all of what was said, and you’ll be able to check into the RMIT website to listen to the podcast yourself when it is loaded there in the very near future. What I will do is discuss some of the things she said that resonated with me.

danah described teenagers’ participation in social networks as ‘social grooming’. We are seeing our children form and sustain friendships in public spaces on the Internet. I can vouch for this. When I was a teenager, I was out and about with friends on the weekend and after school, and my friendships were formed in what were public spaces, but often private in terms of my parent’s knowledge of what I was doing. The same can’t be said for my own children. They are home a lot of the time, escorted to events and picked up by their parents. Their social lives are lived in large part in online spaces like Facebook and through games where they play online with other kids they know. One thing I’m not doing is friending them in their networks. We have open discussions about their participation and I hammer home the need for control of privacy settings, but I don’t look over their shoulders and peer deeply into their social lives. I respect their need for their own development. They will make mistakes, I’m quite sure of it, but that’s part of the learning curve of life I figure.   I know that I needed space to become my own person when I was a teenager, and they need the same.

danah talked of ‘bedroom culture’ being a feature of participation, and suggested it is a natural extension of what has always been. Once again, I could relate. The only space that was truly mine as a teenager was my room; it was where I practised the latest dance moves in front of the mirror, experimented with make-up, read, slept, did homework, and dumped my clothes all over the floor. It was where my friends and I went when they visited. It was my space and it was important to me. I watch my daughter and see similar patterns, especially the clothes all over the floor. She has a laptop and we have a wireless home connection. She spends time with her friends in online spaces in the environment that she owns. I respect her need to do that. It’s her space, and its important to her.

danah made some interesting points about kids she has interviewed who have their parents as friends on sites like Facebook. She talked of teenagers ‘hiding in plain sight’. One teenager’s comment was ‘everyone disappears after the Mum post’, referring to parents who reply to their kid’s status updates. danah made reference to coded messages teenagers use to achieve a level of privacy for themselves and admitted that even she, who spends so much time examining these networks, can’t work out the coded nature of wall posts. Her overarching message was a need for open dialogue with your children, and a level of trust. She spoke of how kids today are learning to live in a world of surveillance, and are trying to carve out a level of privacy for themselves in these environments. Some have moved away from the very public Facebook to networks like Twitter, where they can make locked accounts and add only who they want into their network. There they feel more sure that what they say will not be escalated to wide scale broadcasting, and nor will they have people they don’t want peering into their conversations.

Her comments on the idea of sexual predators online were really interesting. She said, if my notes are accurate, the ‘Sexual predator statistically doesn’t exist’. The point being, there are few of these instances occurring given the fact that 93% of teenagers are operating in social networks of one form or another. She spoke of conducting 400 studies with all the evidence pointing towards less danger in online spaces than what was imagined, and was told to go back and conduct more research! What we do see is our television and newspaper media honing in on incidents and giving the impression there is danger in every interaction online. She spoke of Australia being “one of the only places competing with the US on fear mongering”. Strong words, and quite possibly, the truth.

danah spoke of how she sees us grappling with a culture of fear and it intersecting with the attention economy we find ourselves living in. Her final points were prompted from a question from Camilla Elliott about how we as educators deal with all of this in schools today. She spoke of the necessity for digital literacy teaching in our schools, and stressed that we should be looking at it with a health and wellbeing focus in mind. She said there is a case for teachers violating the rules of Facebook and setting up second accounts, separate from their own personal accounts. You would share the password to the account with your school principal. Here, teachers could accept friend requests from students, but not request that students become their friends. This space would be where teachers could operate with an eyes wide open approach to safety for kids.  An interesting thought, one that would certainly be at odds with much of what is recommended to teachers today in terms of Facebook use.

danah asked the question to us all, “How do you deal with a world that is messy?” Some of how we go about doing that is looking to the kids themselves and noting how they are managing their online lives. For those of us dealing with this head on in schools, I think it’s about dialogue. It’s about making time in our curriculums to have these conversations, it’s about creating safe spaces where kids feel OK about sharing their concerns, it’s about using social tools/spaces within curriculum so we can model behaviours. It’s a big job, and we need people to do it. That means we need teachers who are willing to be well versed in social networks themselves, and who are willing to commit themselves to learning from experts like danah who have spent years immersed in their understanding.

Thanks danah, for a stimulating presentation. Neurons are firing. I hope what I’ve written here is true to the intentions of your presentation. Please do correct me if there is anything here I have misconstrued.

*why is danah’s name always in lower case? She explains it on her ‘about me’ page.

My birth name was “danah michele mattas” (spelled all funky because my mother loved typographical balance). Two years later, my brother Ryan was born. My parents divorced when i was five and my mother, brother and i set off for York, Pennsylvania. My mother re-married when i was in the third grade and we moved to Lancaster. Shortly afterwards, all of us changed our name to “Beard.” My mother and step-father divorced when i was in the 9th grade, but we stayed in Lancaster. In college, i changed my last name to “boyd” to honor my grandfather. When doing the legal paperwork, i switched back to a lower-cased style to reflect my mother’s original balancing and to satisfy my own political irritation at the importance of capitalization.

8 Replies to “How do you deal with a world that is messy? danah boyd at RMIT.”