Last month, I delivered a talk at TEDxMelbourne: Education Leadership. It should be online in the next week or two at the TEDxMelbourne YouTube channel, so you can make your mind up then as to what you think about it. I haven’t spoken about it at length here, but I thought it might be an interesting exercise to analyse the process I went through  putting a talk like that together. It may help anyone who is asked to do something similar. 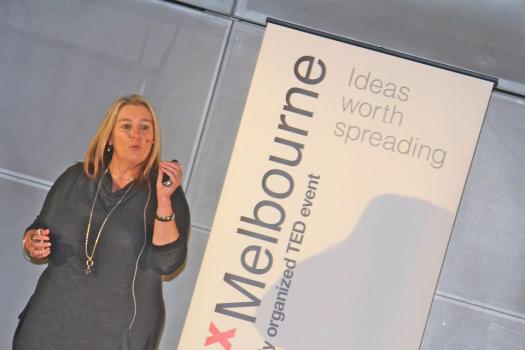 First up, there are time restrictions on your talk. The premise of a TEDx talk is to present an idea worth spreading in 18 minutes or less. I’ve watched my fair share of TED talks and know that the ones that grab my attention are often those that have a thread of a story running through them. When I first started presenting, I found the work of Garr Reynolds invaluable. Garr speaks often of the need to tell a story when you are presenting and I try my best to do that using techniques he recommends for slides that accompany my talks. So, I knew I needed a story thread that could run through my talk and bind it together.

Getting your ideas down

Once I had my idea, I then needed to put pen to paper, or fingers to keyboard to be more accurate. I use Evernote for most of my notetaking now, so I set up a folder and started jotting down ideas as they came to me. I’m not sure if this is true for everyone who delivers a talk like this, but for me, it occupied much of my available thinking time in the weeks leading up to it. My thinking time is often restricted to moments of solitude, and they are not all that frequent in my busy life. Some of my best ideas come to me while getting ready for work in the morning, when everyone else is asleep and there’s nothing that can distract me. I had to take to having my iPad or phone close by at all times so that I could jot down lines on the fly. Some of the key ideas came while I was standing under a hot shower; I’d have to repeat them over until I could grab the iPad and record them for posterity.

I’m used to using a slide deck to guide my presentations. I don’t use notes when I present; I have my ideas running through my head and the impetus for the next idea is prompted by the next slide in the deck. I’m used to presentations of an hour or so in length, and know that I have room to ad lib or embellish, or speed the presentation along if I’m running out of time. A TEDx talk is very different given the time restrictions. I was also pretty conscious that it was going to be filmed and I didn’t want my speech to be sloppy or to fall into habits that I know I have when I’m speaking in front of a group. I tend to say, ‘you know’ and sometimes lazily abbreviate words eg: say ‘gonna’ instead of ‘going to’. I’d reconciled that notes weren’t going to suffice; I was going to need to write this out as a speech.

My dilemma was finding time to write. In the lead up to this talk, I had an ISTE presentation and a Keynote to prepare, as well as marking and end of semester reports to write. I resolved that the fourteen hour flight to Los Angeles was going to be writing time for this talk. I needed to go into airplane mode where no other distractions were going to interfere with the writing process. It worked. I wrote the bulk of the talk on my iPad on the flight over inside the Evernote app. I found myself dozing on the flight and dreaming my way through the talk. On more than one occasion, lines that I used on the final talk were ones that came to me in my sleep; I’d wake and scramble for the iPad, getting them down before they disappeared from consciousness. The flight home gave me an opportunity to look at it closely again, and I polished it further and added new paragraphs on that journey home.

Once home, I decided I needed to record myself speaking the talk to time it and see how I went with the 18 minute limit. I used SoundCloud to do this, and shared the track with Jon Yeo and Hamish Curry who were mentoring me for this talk. Their feedback was invaluable, and led to me refining the talk further.

The Hardest Part – relying on memory

When I was happy with how it looked, it came time to commit it to memory.

I haven’t had to memorise content that has a time limit restriction for a very long time, and I struggled trying to to do this. I’d read it over and over, but it just wasn’t coming naturally to me. One night in the week preceding the talk, I had a minor breakdown and told my family I didn’t think I was going to be able to do it. It was that breakdown that was the catalyst for finding a way through. I pulled myself together, took the speech in hand and wrote it out in point form. I condensed 3000 or so words down into key ideas and lines and started to rely on these to prompt my memory to fill the gaps. This was a major breakthrough – finally it was coming together.

An intense rehearsal stage followed. My lounge room became my venue and the blank television screen was my audience. My family found it quite amusing listening to me speak animatedly to no-one for hours on end. I used the stopwatch on my phone to record the length of the talk, but every run through was different. I never delivered the same talk twice. Sometimes I’d be over 18 minutes, and sometimes I’d be under. After a couple of days of this, I had to accept that I might not stay within the 18 minute limit and that I was more than likely to run over. What I came to realise was that, in my mind, it was more important that I impart my message and not get hung up on 30 seconds here or there.

The day prior to the talk I realised that I was going to need some palm cards with me as a bit of a crutch to help me on the night. I made four small cards that fit into my palm and I wrote key words for each part of the talk to help prompt me if I stumbled. It gave me peace of mind, and at that stage, I needed it!

The realities of the stage

One of the things I rely on when doing any form of public speaking, be it in a classroom or at a venue, is making a connection with an audience and feeding off their reaction to your words. Not everyone is always with you, but there’s usually some kind of body language from someone that’s encouraging and helps you give out the energy needed. I’d forgotten about the lighting that’s required when you’re being filmed and found myself on stage with spotlights glaring from the sides and an audience of shadowy heads in front of me. I couldn’t for the life of me make out a face and see how the audience were reacting to my words. I could hear laughter at appropriate moments, but couldn’t detect if there were any nodding heads or knowing smiles. It was like I was standing in my loungeroom talking to the blank television!

You can be the judge of the success or failure of the talk when it becomes available. I’ve come out of the experience very thankful for having been given the opportunity. It was one of the hardest things I’ve ever done, but one of the most rewarding too. I have new found respect for anyone who has done a TED or TEDx talk, and for those students out there whom we ask to perform oral presentations in our English classes on a regular basis. One of the really cool features of the night was the inclusion of Lynne Cazaly, an artist who drew our talks in graphic form as we spoke. Her work is such a wonderful representation of what was imparted. 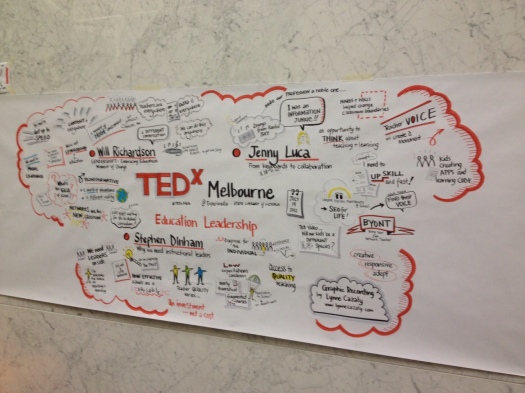 True Blue Production, who volunteered their services to film on the night, have done a great job of a backstage video of the event. Take a look below.

Special thanks from me go to Hamish Curry and Jon Yeo. Thanks for the great mentoring and the opportunity. I am very grateful.

5 Replies to “How do you prepare for a TEDx talk?”